I try to use/wear things as long as possible before replacing them; that goes for exercise wear, underwear, and home linens, as well as clothing.  Last year I made it a goal to replace anything that needed replacing with the most sustainable option I can afford, starting with my lingerie drawer.  I successfully replaced some VERY old underwear with new organic cotton and brands that produce in the US, and couldn’t be happier.  So, I decided to try and tackle my “towel” problem.

I had a face towel that I LOVEd, but was literally more than 20 years old;  my mother bought it for me when I moved into my first apartment.  It worked, but it was so ugly, threadbare, and shredding.  I was loathe to get rid of it, but there comes a time when even though something may still perform it’s “job,” it has tired of doing so, and shows it.  As Marie Kondo would advise, I thanked it for it’s service, and sent it on it’s way.

We also have random towels here and there that are old, mismatched, never dry properly, and are starting to fall apart, so I decided to start replacing some of them with organic cotton.  Instead of buying a set of one style, though, I wanted to try a selection and decide which one to commit to for a full set. 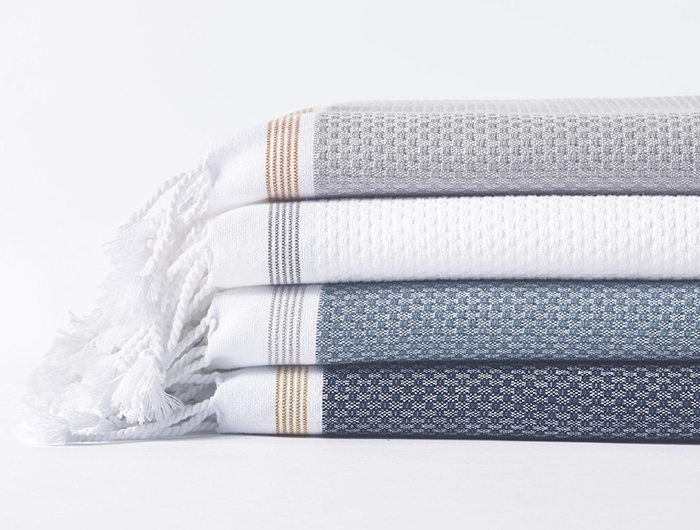 We’ve had the towels for a little over a month and I’m incredibly happy with all of them.  I love the Mediterranean towel (I always wanted to try a Turkish-style towel), but it seems more appropriate for summer, or as a beach towel.  It’s very absorbent, and I love that it dries quickly, but I think I prefer a more soft, thick, cozy towel for bathing. I think I’d pass on the Air Weight towels, they’re fine, but nothing too special honestly.  I really prefer the soft, light, plush feeling of the cloud loom towels for long-term use and to buy as a complete set.

Really, it’s just a matter of preference, all the towels are wonderful, soft and have held up nicely.  I just think now after trying them all, I want a thicker, plush towel.  I wash them all once a week (I don’t know if that’s enough, or too little…it’s just what I do…) in cold water and dry on low heat without a dryer sheet as per Coyuchi’s recommendations.  I want these towels to LAST FOREVER, given how expensive they are, so I’m going to baby them!!

I did sign up for their email newsletter to get 15% off my first order, and they do have a selection of Coyuchi at Sierra Trading Post, if you’re flexible about colors.  I’m going to have to add new towels gradually as I can find discount codes and/or have gift money, building my ultimate bath towel “wardrobe.”  These are expensive, but worth it, and since I don’t need as many towels as I thought I did, I certainly don’t need to buy as many.

As with clothing, it’s worth thinking about how many towels, napkins, dish towels, sheet sets we really NEED.  We have a ridiculous amount of towels around, since all the old, worn out ones get relegated to the rag bin, but seriously, how many rags do we need?? We need a few towels for bathing Dagny and I use old towels for the pool, but before I got rid of them, we absolutely had too many.

We also have too many napkins and dish towels. I guess we tend to collect things like that, and I know I like to have a stockpile so I don’t have to do laundry very often, but I’ve noticed lately that the more random linens we have around, the MORE laundry I end up doing! Now that we have fewer bath towels, I just throw them in with my clothes on the weekend, and I’m done.

That’s something I’m trying to be much more conscious of lately. I’ve always had a “scarcity” mentality, and worry about not having what I want/need around at any given moment, so I buy multiples, and make sure to have backups on hand.  Besides the fact that it creates clutter and having more than I need, I ultimately also think it feeds the idea of scarcity, instead of alleviating it; as I have less, and just exactly what I need, I feel more free, and not so scared about not having enough.  Go figure.

Have you tried any organic cotton towels? How do you buy your home linens?