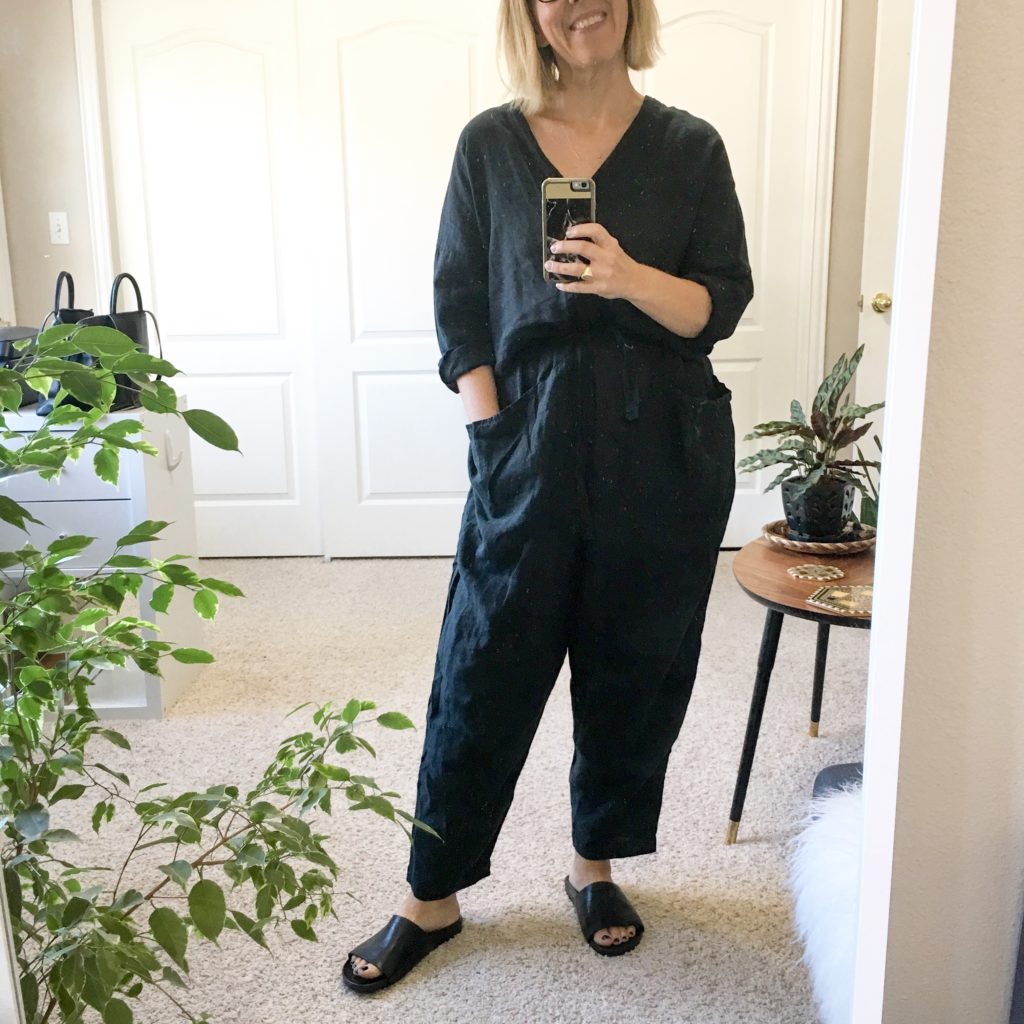 FYI, the jumpsuit is sold out almost everywhere in black, but it’s on sale via Garmentory* in Oatmeal in size medium

I ordered this Black Crane jumpsuit on a whim, sort of, and after talking to a wonderful artist I met at the arts festival here a couple weekends ago, who was wearing the Origami jumpsuit (on sale!!) but also has this one.  I was initially going to get the origami jumpsuit, but decided that this one would be much more practical, since, sleeves.  I love it, and wore it yesterday running errands.
Yes, it does literally look like I’m wearing an oversized painter’s jumpsuit, but I don’t care, it’s so comfortable, and look at the HUGE POCKETS!!! It’s not so bad to get out of for bathroom breaks, either, and I like that the legs are tapered, so it’s not entirely oversized.  Love it, and recommend it if you’re looking for a jumpsuit but want sleeves.  Also, LINEN FTW.

Also, you see I ordered for myself the Everlane slide sandals to see how they compare to the crossover style, and as I thought, they’re much more comfortable (less narrow at the toes) right off.  The form still leaves something to be desired (it’s not deep enough), but the more I wear these and the crossover style, the more comfortable they get.  And I would still recommend taking your true size.  I think they’re worth waiting for if your size is sold out.

Finally, as much as I hate to admit it, I went to Outdoor Voices the other day specifically to try their new skort on, and bought it.  I live in skorts during warmer months because I don’t wear shorts – they are what I walk Dagny in a million times a day, and I am ALWAYS looking for good ones. They’re not so easy to find.  I have had a couple from Lululemon that I liked, but I was wearing one the other day and my phone fell out of the pocket I had it in into the street. Ugh.  I also have one by Prana that I’ve been wearing, but as often as I wear them, I need to have more than one to alternate.

The Outdoor Voices skort is really good, mostly because the shorts are longer underneath and it’s more slim, instead of tennis-skirt-y if that makes sense.  It’s longer too, which I love.  Yes. Polyester, and I’m not a fan of OV’s marketing (it’s just not directed towards me…), but the skort is good, and I will wear it until it’s in shreds, and then recycle it.  I got the large, FYI, although the sales associates (who were basically 12) told me that everyone was sizing down in it…

Oh, and did you know, EVERYONE is having a sale right now.  Nordstrom (there’s some good Eileen Fisher on sale, not so much James Perse), Net-a-Porter has A LOT of James Perse on sale:

I’ll post more sales/codes/etc. on Grechen’s Codes, but it makes me tired just thinking about it LOL – oh, my Atelier Delphine haori coat is on sale at Garmentory this weekend too…

*use my referral link at Garmentory and when you sign up for an account you’ll get a $20 credit.  They’re having a sale now too…

Transparent.  I still have thoughts on gender-neutral dressing to get to, based on Jill Soloway’s talk with Terry Gross, but can you believe I hadn’t watched Transparent yet? It’s so wonderful, and emotional, and frustrating, and beautiful…

The New Rules of Marriage – because Gwyneth told me to. Haha..well, yes, and also because it sounds very interesting, and like it could contain some new strategies I can use to communicate better.

And You Are a Badass: How to Stop Doubting Your Greatness and Start Living an Awesome Life because the meditation “gym” I’ve been to started a book club and this is their first book! I’m super-excited; I’ve always wanted to be part of a book club 🙂

I’m going to Orlando Sunday morning for my father’s birthday on Monday and will be back on Thursday. This is the trip where my sister’s family is there too, so it’ll be crowded, and busy, but fun.  I hope to spend most of the time in the lake 🙂 And I will probably not work at all.  I feel anxious just saying that, but there it is.  So far I don’t have any posts scheduled, or any plans to work, so we’ll see.  I hope you have some fun and/or relaxing (or both) Memorial Day plans!!

Oh, and Dagny…She doesn’t do this every time, but she will often use her nose to “push” water from her water bowl into her food bowl.  Then sometimes she’ll eat, and sometimes she won’t.  She’s SOOO finicky and it has to be just the right time for her to eat.  She wants her food down at the same times every day (6 AM and 5PM), but she doesn’t necessarily eat it then.  Oy.  I don’t think it’s that she wants her food moist, because I add pureed sweet potato to her dry food, so it’s pretty moist already.  Does anyone else’s dog do this?? It makes SUCH a mess!!

Shop Earrings Statement, Shop All, Sandals, Shoes and more. Get this widget.