You are here: Home / creating your conscious closet / Boycotts STILL Don’t Work & Neither Does Ethical Shopping

I’ve been reading and posting quite a bit recently on the role we as consumers (and women of some privilege) play in trying to make the fashion industry more sustainable and ethical and how that has an influence on people, animals and planet overall. That’s been a passion of mine since 2008, but there’s also been increasing buzz about individual action and the myth of ethical consumption on Instagram and amongst ethical bloggers, along with a well-deserved sense of frustration that there are a lot of “ethical influencers” out there who post mostly about their latest ethical and sustainable acquisition and not a lot else.

I have a lot more to talk about tomorrow in my Follow-Up Friday post (with links to TONS of articles!), but I thought it would be interesting to repost this article I wrote over at Grechenreiter.com back in 2015.

Things have changed a bit since then, many companies are much more knowledgeable and transparent about their supply-chains, and that knowledge can in turn help us to make better decisions about where we shop.

But I also still believe that we must do what we can, especially those of us with the means and influence to do so, and that includes individual actions. Where we shop does matter; our money has power, we have a responsibility to use it wisely. But we also must do what realistically works for us, without judgement or expectation that everyone else must do the same.

Find a path forward, and do your best to stay on it.

Anyway…here’s one from the archives!! Enjoy. 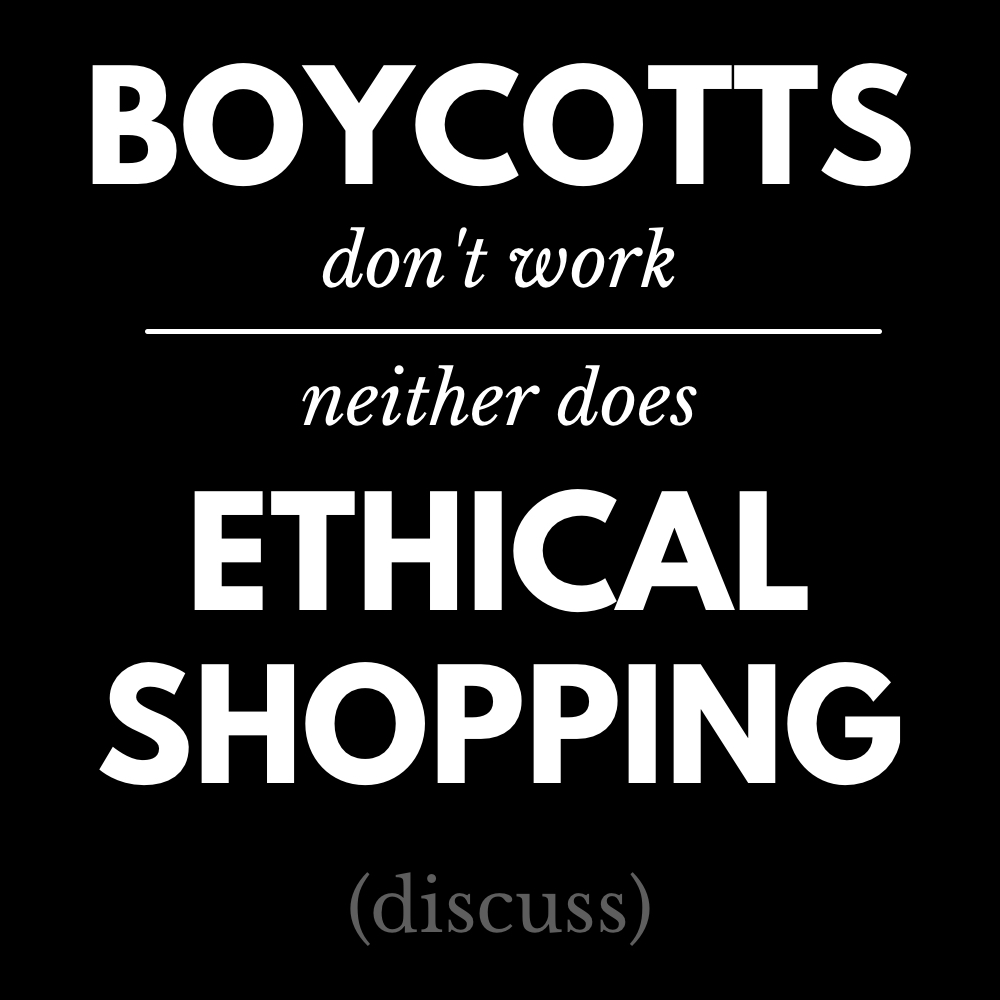 So, you saw the True Cost. What do you do now? Throw out everything in your closet and start over? Not so fast. Vow to never shop H&M, Zara, or The Gap again? Tempting, but what will that actually accomplish? How will it affect the lives of the women who make our clothes in Bangladesh, Cambodia and India? What will it do to relieve water pollution in those countries?

That’s the hard part about seeing movies like this and reading articles about the TRUE cost of fashion. What to do afterwards? If you’re sensitive to the issues, and truly want to make a difference, then HOW?

I don’t have an easy answer, although I don’t think that a lot of the advice given to  “get rid of it, start over with eco-friendlier fashion, and never buy from -enter offending company here- again” is the best way to go about affecting change.  That’s too easy to say: “Done, and done.” We’d go on about our lives buying from companies like Patagonia, Stella McCartney, companies we think are ethical and sustainable, but both of which have had terrible issues lately with their wool supply chain, or we buy from brands that produce “made in the US,” locally made items from Etsy, or consume fabrics such as organic cotton, hemp or bamboo, all the while believing that we are changing something. Anything. We are the good guys.

There’s nothing specifically wrong with not wanting YOUR money to support companies who either are now, or have been involved in environmental pollution or questionable labor practices, but at the end of the day, it’s nearly impossible to tell who the offenders are just from reading a “made in” label, or refusing to set foot in a store.

Back in the 80’s and 90’s when we were boycotting Nike and Kmart, things were different. It was a wake-up call to brands to do better about regulating their supply chains and labor practices. And in large part, it worked. But

the way our clothes are made and distributed and thrown away is barely recognizable compared to the way it was done in the ’90s. And yet our playbook for improving it remains exactly the same. (The Myth of the Ethical Shopper)

We can’t simply say now that we won’t buy from X store, or Y brand and reasonably think that we’re doing anything at all to affect change. In fact, the author of the article argues even further that we (the developed world) aren’t even the most important players in the apparel market anymore, it’s the manufacturers that are producing and SELLING in the developing world with the influence: India produces twice as much clothing for its own consumers as it does for the western world and 56% of clothing produced in china is for the Chinese market. Also, rich countries’ share of consumption is expected to fall from 64 to 30% in the next 15 years.

So our efforts here in the US to influence supply chains and subcontractors in India by refusing to buy from H&M will have little if any affect at all. This is “why child labor persists” – factories in developing countries that manufacture for export need to look like they’re complying with social standards, for domestic markets, they don’t.

What WILL  make a difference? How can we help change the direction of the apparel industry towards the better? If we believe that it all started with over-consumption to cheap, disposable fashion, then doesn’t it follow that we might be able to change it back by consuming less? Or consuming better?

You can’t choose three or four products where you’d like to avoid complicity in forced labor and low pay, and just decide not to worry about everything else. Your coffee might be fair trade, but what about the machine you’re brewing it in? Check the bottom, dude; I’ll bet five bucks it was made in China. Your car was welded together in Mexico, from iron ore mined in Brazil, smelted in Paraguay. The acetaminophen you take for a headache was produced by a company that keeps poor countries from producing generic medicines for its own people. (So you Say you’re an Ethical Shopper)

It’s a pretty dim view. And at this point, we could throw up our hands and say “we give up! we can’t do anything right!” But that’s not true either.

Could we move away from consuming new altogether? Is buying secondhand a better idea? Probably. I suppose it’s possible to buy 100% secondhand if you’re up for it; appliances, furniture, clothing, shoes, cars, etc. Many people do this already, and not because they want to.

But if we choose to buy secondhand as an activist alternative to buying new, is it not also “opting out?” Along with purchasing ONLY fair trade, or ONLY organic, you’re turning a blind eye to the problem:

This is what you’re doing when you buy a fair trade t-shirt or an organic avocado: Concentrating your attention on the tiny corner of the global economy that is not shrouded to you. Instead of raising the floor, you’re raising the ceiling. Fair trade allows us to go around bad institutions and let the worst sweatshops remain, rather than take responsibility for the myriad ways in which we reward them. (So you Say you’re an Ethical Shopper)

The author argues in a follow-up that the answer is instead of boycotting, or trying to be an “ethical shopper” (which he doesn’t believe is possible):

Give money to a NGO that helps register unions in the developing world. Sign a petition. Write your senator.

Our primary leverage over the developing world comes in the form of market access (bilateral trade agreements, TPP, the World Trade Organization) and financial instruments (the World Bank, the IMF, export credit). Companies lobby to protect their interests in these negotiations, and it’s about time we started doing it too. (emphasis mine!)

And of course in a rebuttal, the author of another article, Ethical Shoppers – We’re not a Myth, argues that yes, that’s great, but we CAN also influence supply chains (albeit small ones) by choosing to buy better, to buy organic cotton and other sustainable fabrics:

…shoppers and the supply chains from which we purchase have a responsibility to be engaged in the process of change alongside government. It is currently many of those brands and supply chains and the shoppers who support them who are leading this change. Let’s grow this movement. With every purchase, you are voting with your wallet. You, the shopper, do have power. You are not a myth.

I agree with this as well, and I fully support companies like Zady, which is completely transparent about everything they produce within their private label brand, from where the fiber is grown/raised all the way to where it is sewn.  Eileen Fisher is also very good at this, and Everlane could be better at disclosing where their fabric comes from, but at least is transparent with regard to their factories.

But again, it’s too easy to think we can simply “shop” away a problem that shopping started. It’s better than nothing, though, I think, and works well together with writing your senators, and signing petitions.

Personally, I will continue to try and buy less, only buying or replacing things that need replacing with sustainable alternatives (organic cotton, sustainable fabrics, local manufacturing, transparent supply chains…) or secondhand as much as possible.  But now, I’ll begin to add in writing to my politicians and learning more about NGOs and organizations that are actually doing the work on the ground to advance the issues I care about.

Of course, it’s up to you what you do at this point, I’m not making any prescriptions.  I think we can each start by changing our habits just a little, and grow into bigger change from there.  Something, anything, is better than nothing, I still believe.